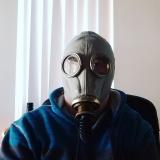 Ayy I'm OxygenDeficient formerly AssassinKitten. Just call me Kitten, Kitty or Kit, everyone else does.

I like to draw, play video games, watch horror movies and collect absolutely useless shit that I do not need. If I'm not drawing then I'm usually replaying Doom for like the umpteenth time, because Doom is my favorite game. As everyone can probably tell, I guess.
My taste in video games is kind of all over the place, I'll play action games, FPS games, platformers, RPGs. Just kind of whatever as long as it catches my interest. Although I've started leaning more heavily into playing action or FPS games. I pretty much exclusively play on PS4, because my laptop can't run jack shit without trying to off itself. Feel free to add me on PSN if you have it and want to play any multiplayer games, just let me know who you are if you do lmao. My name on PSN is also OxygenDeficient.

Other than wasting a majority of my time playing video games or drawing stupid shit I also like to totally not pirate movies. I mostly watch either Sci-fi Horror or Slashers more than anything else, but I also like a handful of Marvel Movies. It's mostly Spider-Man though lmao. I have very shitty taste in movies, so probably don't ask me for suggestions lmao.

I also collect Gas Masks. And I guess also Action figures and both kind of happened by accident. I currently have 4 gas masks and I'll probably end up getting more over time. I currently have a Gp-5 which was the first one I got, a PMK-2, a GP-7 and a 4A1, which came somewhat damaged which kind of pissed me off ngl.
I also have a dumb amount of action figures. I don't really plan to get more unless I happen to find ones of characters or properties I like. A large majority of the ones I do have are just various Jasons. I have one for Part 2, Part 3, Part 4, Part 5, and Part 6. The other two figures I have are of Krieg from Borderlands 2 and the DoomSlayer, because what else did you expect.


Oof thank the Mimi for helping me get the box to be transparent. NOW ALL CAN SEE THE REVENANT.

14
Depressing Sandwich.txt
In Miscellaneous
On 06 Apr 2020