(Go to comments)
Merric woke up early as usual to hear a loud scream. He watched at they dragged Elice into the other room. One of the men came back for merric but he didn't struggle, He knew it was useless. as he entered the other room he sarcastically said, "Hey doc, great progress recently" and a guard smacked him across the face knocking him to the floor. Merric got up again smiling as the doctor approached him with a large needle and a grim look. He jabbed the needle into Merric's arm and that was the last thing merric remembered of that room.
Merric woke back up in his cell, He looked at his hands. Still human, merric thought, I wonder if Elice is ok. His thoughts were interrupted by a huge surge of pain. unintentionally Merric let out a yell of pain as it continued to get worse. A whole bunch of scientists ran in to see Merric on the floor of his cage yelling, "Make it stop!" He yelled and a scientist went to the door of his cage and opened it, That was his fatal mistake.
Merric suddenly jumped at the scientist tackiling him to the ground. The others pulled out weapons to stop him but Merric couldn't control himself. He lunged at the others and easily killed them all. Merric then turned around, he could move his own body again! He walked to Elice's cage and she was laying at the back motionless. "Elice?" he hissed, she didn't reply. Merric went to one of the dead bodies and stole his keys, he then opened Elice's cage and walked in. "Elice"" he asked again, still with no reply. Tears welling up in his eyes merric reached down to touch her but stopped and looked at his hand. They were all scaled and sharp, like claws. He turned and looked in the reflective metal the cage was made of. His entire body was scales instead of skin, he also had a tail. The last thing he noticed were the two giant leathery wings on his back. he stared for a few seconds then remembered where he was. He picked up Elice's small body and ran for the door.
+0 -0 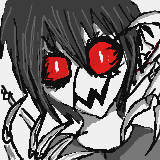 Nintendo 3DS is ™ Nintendo Co. Ltd. This website is ©2009-2023 HullBreach Studios. All rights reserved. Members are responsible for their own content. No account information will be given to third-parties without your consent.